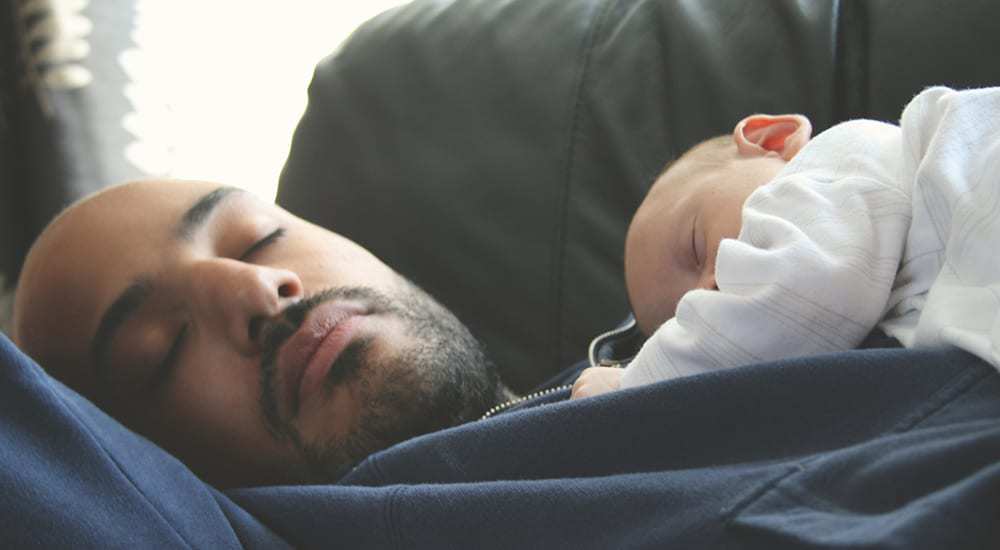 6 Times When Dads Fell Asleep On The Parent Job

It’s true what they say: You never sleep the same—or at all—after becoming a parent. Here, six brave dads admit to falling short on parenting when they were short on sleep.

“When my boys were babies, I fell asleep on the bus on my way home and missed my stop. I ended up riding to the final stop, where the driver woke me up and asked me to exit the bus. I then had to wander around Target for an hour until my wife could pick me up. She was so annoyed—not because she had to corral the boys into the car (when they needed to go to bed) and drive out of the way, but because she wasn’t the one to get an hour alone in Target.”

2. Spying in the ceiling

“My daughter had just turned 16, and I began to notice a new masculine musk smell in our home. I was sure my daughter was bringing a boy into the house. One night, when my daughter thought me and my wife were out, I had the brilliant idea to stake out in the ceiling. Perched precariously on a wooden beam, I spent the most gruesome three hours of my life in agonizing discomfort. Eventually I fell asleep, until I slipped and crashed through the ceiling particle boards. I landed right in front of my daughter and her friends who were innocently watching TV. They screamed and stared in disbelief as I gathered myself up. I had never felt so much self-pity and idiocy at once. And there wasn’t a single boy in sight.”

“During those first few sleepless months when my baby was a newborn, there were many nights that I’d go to change the diaper, but instead of putting a fresh diaper on, I’d skip the diaper all together and just put the onesie back on. I’m sure you can guess what happened next.”

The Effect Of Burnout on Mom and Dad

“At three years old, my daughter would wake up every night and crawl into my bed. At first, I was like, ‘Awww, look at my sweet girl curled up and comfy.’ But she became such a disruptive force, as she thrashed, wet the bed, and talked throughout the night. I was getting such little sleep that I would dream about sleeping during my commute to work. I finally had to put a kibosh on the co-sleeping, though we will still co-nap occasionally.”

5. Too tired for food

“When my oldest was a newborn I would arrive home everyday around 5pm, and my wife would immediately give me the baby. I would lay her on my chest and like clockwork we’d both fall fast asleep. This went on for a couple of weeks and my wife would never wake me—not even to eat. Needless to say, I skipped many dinners back then.”

“My wife went into labor as soon as I got home from a late night gig. By the time my daughter was born, I was clearly sleep-deprived. I was so out of it that I wrote ‘Victor’ on her birth certificate application, instead of Victoria!”

the only mattress with a lifetime warranty

The Nectar forever warranty ensures you're covered for life as long as you own the mattress.